Patch now please! Lots of vulnerability in the world as always. Just as much in the world of Apple as there is anywhere else

There’s going to be some exciting racing in what’s left of the Vuelta a Espana. With over 3 minutes to claw back from Nairo Quintana, Chris Froome has no choice but to attack and Esteban Chaves only has a 5 second buffer from Alberto Contador to protect his podium place (which he’s bound to lose in Friday’s time trial). 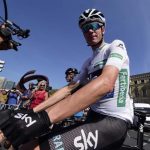 There will have to be yet more fireworks in what has been and brilliant, yet very exhausting for the riders, Spanish grand tour.

Cycling and pain?! – surely not! They go together like love and marriage! Ouch…  http://buff.ly/2bf5OSc